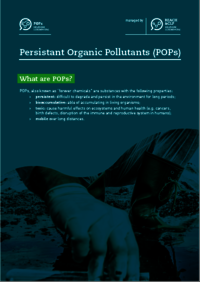 In order to address the issue of persistent organic pollutants, global cooperation has been initiated through provisions described in international legislation, notably the Stockholm Convention (or "POPs Convention") and the Aarhus Protocol (or "POPs Protocol").

These two international legislations have the same objectives: the reduction, control and elimination of emissions of POPs substances into the environment.